Weather permitting (wind or rain), weed cutting starts in May and continues at a heavy pace until mid July. Weeds are not cut on the weekend. “We expect to cut weeds at a strong pace until the weeds drop or die down starting in late June. After mid-July we will cut as needed until August 30”, says BLPRD Aquatic Plant Manager Jim Maxwell. He can be reached at 715-857-5316 if you have questions.

The majority of weeds you see on the lake are curly-leaf pondweed (CLP), an invasive species, unfortunately, common to 542 lakes in Wisconsin. According to Jeremy Williamson, Water Quality Specialist, Polk County Land and Water Resources Department, “weed growth in lakes varies year to year. Light snow cover over the ice allows more light to penetrate. More than any other factor, this is likely the reason we are seeing more weed growth in lakes across Polk County”. Another factor that can add to the amount of curly-leaf is the lower water level of the lake at the start of Spring.

No harvesting in sensitive areas and 100 feet of shoreline
There are distance-from-shore and depth restrictions that prevent the harvesting from harming important fish spawning and nursery habitat. Our curly-leaf pondweed harvesting program follows current best management practices including early season, lakewide harvesting (with the exception of Sensitive Area sites and within 100 feet of shorelines) to cut and collect plants before turion formation and deposition.

Early-season, large-scale curly-leaf pondweed harvesting
The harvesting season will begin each spring based on a visual observation.  Harvesting will begin when the CLP can effectively be harvested.  This is expected to occur when the plants can be efficiently harvested and the harvester blades can effectively cut and harvest.  The plan is to clear-cut 80 of the existing 110 acres of curly-leaf pondweed in the spring prior to the maturation of the CLP, to within 100 feet of the shoreline.  After June 15, harvesting may occur in water as shallow as 30 inches, but it should not occur within 100 feet of shore with the exception of sensitive areas. Harvesting will continue as needed during all CLP growth periods, and particularly to harvest CLP over specific broad areas to reduce turion deposition and work towards the goals of CLP reduction.

Big Blake Lake has a valuable fishery that is particularly beneficial for bass and panfish populations.  Therefore, spawning and nursery areas must be protected. 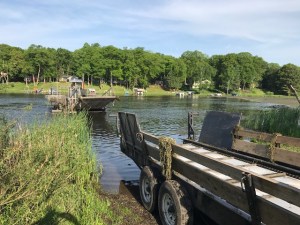 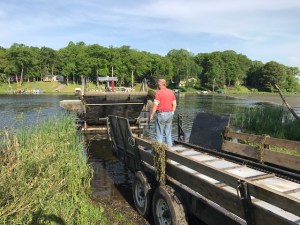 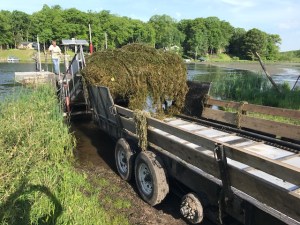 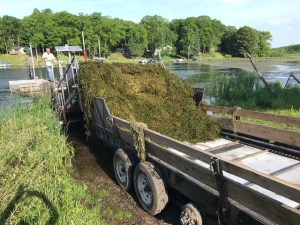 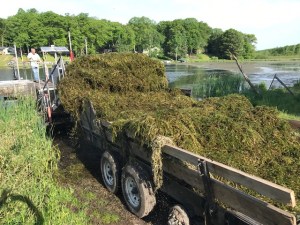